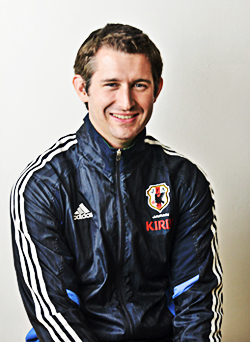 Trevor Kew is a Canadian writer and teacher who is the author of six children’s novels: Trading Goals (Lorimer, 2009), Sidelined (Lorimer, 2010), Breakaway (Lorimer, 2011), Playing Favourites (Lorimer, 2012), Bench Brawl (Lorimer, 2014), and Run for Your Life (Lorimer, 2017).    Trevor was also a contributor to Tomo (Stone Bridge Press, 2012), an anthology of stories related to Japan which was designed to raise money for disaster relief efforts in the Tohoku region.  He is currently represented by the Anne McDermid Agency.

A frequent contributor to various magazines including Free Kick magazine and 90 Minutes, Trevor’s articles mainly focus on his combined experiences of sport, culture and travel in places as diverse as Rwanda, China and Iran. In the summer of 2010, he covered the World Cup in South Africa.

Born and raised in Rossland, British Columbia, Canada, Trevor holds a B.A. and a B.Ed. from the University of British Columbia. Since graduating in 2004, he has taught English literature and language in three countries – Canada, England and Japan – and traveled widely.

Trevor has spoken to school groups of all ages (as well as to adult audiences) in Canada, the UK, Japan, Singapore, South Africa and Egypt. If you would like to have him speak to your class in person or via Skype, please contact him through the Contact page. References are available upon request.